I feel somewhat guilty that I have not added anything new to this blog for some time. This is not because I have not been busy using Sonic Pi: far from it: but rather that the things I have been involved in have not lent themselves readily to any articles. Part of this is becuase I always work with the cutting edge version of Sonic Pi, and most people do not have access to it. However, one bit of good news on this front is that if you use a Mac, then you CAN easily obtain a development copy of Sonic Pi 2.12.0-alpha-midi by supporting Sam Aaron, the creator of Sonic Pi on the patreon site. Sam needs financial support to coninue developing Sonic Pi, so if you like it then go to https://www.patreon.com/samaaron and give your support. As a reward you will have access to downloading a recent version of 2.12.0-alpha-midi. This will let you try out using midi in and out and OSC out messages from Sonic Pi.

I build the latest version on my Mac, and have been using midi with Sonic Pi since Christmas, and in my latest work have produced a program to play midi files and or keyboard input from Sonic Pi, with control of the Synths used and some of gtheir parameters using a TouchOSC front end running on my iPad. This gives a new slant to using Sonic Pi, not so much for live coding but rather for live playing, with real time alteration of the synths used and what they sound like as a piece plays. I also use a little midi player called Midi Player X available on the Mac for £1.99 from the App Store, which is ideal for use with Sonic Pi.

I have developed two version of the program, the second one being more versaitle, and produced videos of each program in action to give an idea of what it can do. It does require a reasonable understanding of how things work to set it up and use it, becuse you have to set up and confiugre midi ports to enable connections between the various parts,  and I have not at present published the program for this reason, and also becuase this is an alpha version of Sonic Pi, and some of the commands may be altered (some already ahve been!) before it reaches beta and then release stages. However I may in afuture post give some useful ideas to get you going on using Midi with Sonic Pi. I have spent many hours playing with it, studying the code, and working out hwo the commands work. There is increasingly socumentation, but it is not all present at this moment in time.

So why not view the videos below, then resolve to support the further development of Sonic Pi AND get a copy of the development version to try out on a Mac.

Here is a picture of the latest TouchOSC screen, and there are links to the two videos below. 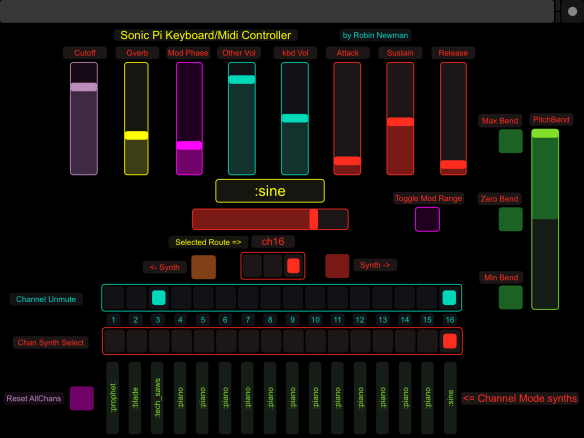