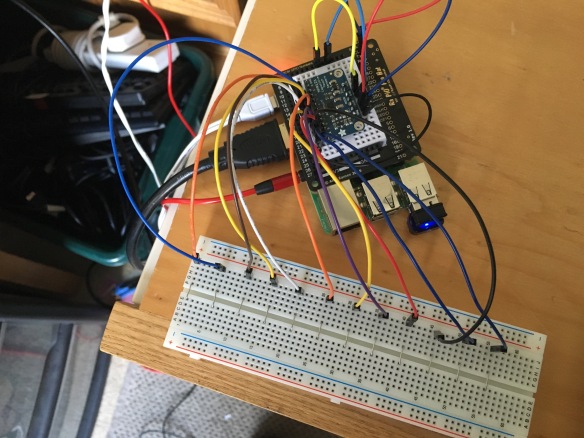 This project is something I’ve been meaning to try for some time, but have at last got round to doing so. It is a culmination of many other things I have done with Sonic Pi, especially following the introduction of OSC messaging added to Sonic Pi 3.I have done several projects interfacing hardware devices such as push buttons, and a ps3 games controller to Sonic Pi. These heve used python to interface to the hardware, and I have completed the link to Sonic Pi by utilising the python-osc library using it to send signals generated by the hardware to Sonic Pi in the form of OSC messages.

I was attracted by Adafruit’s MPR121 12 channel capacitive input board which was available from the PiHut for £8, and which had good documentation supporting it on the Adafruit Site. The documentation shows you how to mount the board on a breadboard, and connect it to a raspberry pi. I used both a Pizero, and a Pi3, as it is possible to use the software I developed to connect either to a local copy of Sonic Pi (running on a Pi3) or to a remote copy of Sonic Pi on a different device, in which case the Pizero may be more appropriate and is certainly cheaper. A small amount of soldering is required to mount the header pins on the board, but this is not too difficult to do. There is a separate PiHat version of the board for £15, if you want to mount it directly on the Pi. In fact I used the standalone board and mounted it on a Rasp.iO ProHat that I already had, which made it very easy to wire things up. I used a 63 row breadboard to make a 12 key “keyboard”

I followed the instructions from Adafruit to install their library, but I modified things slightly so that I could use it with python3 which is required for the python-osc library.

I installed on the latest stretch raspbian, using the following steps:
(First open a terminal window)

Notes: I think all of the install packages in the second line should already be there, but this shows what is needed, and there is no harm in using the line to check

In the Adafruit documentation a problem is flagged concerning the driver for the i2c system. You should install the workaround as specified by editing the config.txt file in the boot partiti

Scroll to the bottom of the file and add the line:

The exit the editor using ctrl+X selecting to save the changes in the file.
You should make sure that i2c is enabled in the Raspberry Pi Confugration. Either use the utility under Preferences on the main window in the Desktop, or from the terminal run

select number 5 Interfacing Options and enable I2C. Also, make sure that your boot option boots to the Desktop, the default setup.

Now reboot the Raspberry Pi so that the changed boot options take effect.

The Adafruit documentation has several screens, or you can download a pdf. The Hardware Page shows the connections between the Pi GPIO pins and the MPR121 board schematically. I used a Rasp.iO ProHat board plugged into a Pi3. This board contains a small embedded breadboard large enough to plug in the MPR121 board, and it also has all the GPIO pins arranged in numerical order, making it easy to make the connections uinsg male to male jumper leads. I used 5 of these to connect the 3v3, GND, SCL and SDA pins as specified, and also the IRQ pin to GPIO pin 26, used in one of the Adafruit example files Raspberry Pi virtual keyboard (to which I made some modifications to it would work on Python3), although that is not part of the full project I develop below, so you can miss it out if you wish. The two pictures below shows these connections. 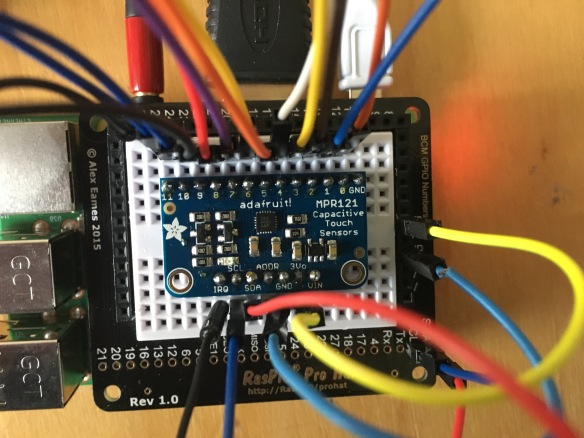 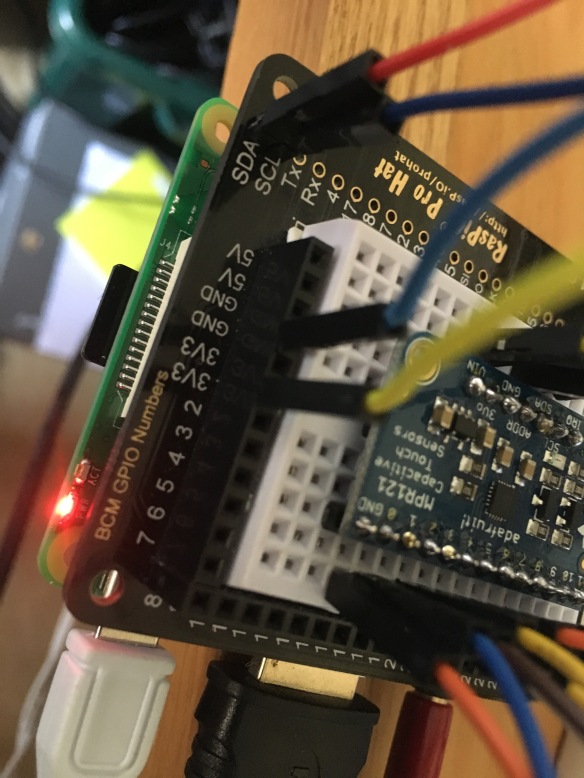 The twelve capacitative inputs are on the over side of the MPR121 board, and I connected each of these using slightly longer male to male jumper leads to a 63 column breadboard, and used short wire links to produce the input “keys”. 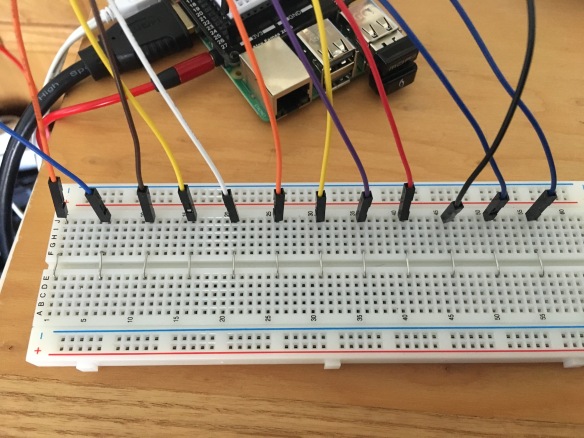 This is only one way to make an input “device” but I found it worked well in practice. If you wish you could make something with slightly larger keys, maybe using aluminium foil. Strips of this could be stuck down onto a piece of wood, and then wired back to the ProHat breadboard, but the wiring would be a little trickier to achieve.

So much for the hardware. What about the software? My main aim in doing this project was to develop a touch keyboard that could be used with Sonic Pi. However before developing the software for that, it is prudent to check the operation of the MPR121 board. Adafruit include several example files that can be utilised, but some of them will need to be modified to work under Python3. However the first one, simpletest.py will work unmodified. To try this out start a terminal and navigate to the Adafruit examples folder:

Touch and release each “key” in turn, and you should see printed output on the terminal screen like this:

You can stop the program running by typing ctrl+C

The remaining two example files are not required by my project, but for the sake of completeness if you want to try out the playtest.py and keyboard.py files you need to modify them slightly. Otherwise you can ignore the following section, and move onto the section describing the software I developed.

I did this and saved the new version as playtest3.py. You can then try it out using

For the file keyboard.py change line 136 from

also, in the requirements for the file listed at the top it states:

These should be changed (and acted upon) to:

You should have already installed the Adafruit library for python3, and when you run the keyboard script you should use

I renamed the altered file to keyboard3.py

We have seen in the simpletest.py script that the MPR121 board can detect keypresses and print the results on teh terminal screen. How do we interface this to Sonic Pi? The intermediate “glue” is to make use of OSC (Open Sound Control) messages. These can be generated using an add-on python library, and version 3 and upwards of Sonic Pi can detect them, and then utilise them to control a program running in Sonic Pi.

The Python library I utilise is called python-osc. This can be installed using the command below, which currently gives version 1.6.6 (Note there is a bug in version 1.6.5)

I developed a script based on Adafruit’s simpletest.py script to which I added the extra code to enable OSC support, and to add message sedning of the state of each “touch key” when it was changed. I also have a PS3 games controller, which I had previously used with OSC support, and I added support for one of the joysticks on this which I utilised in my program. The program below has the Joystick support lines commented out, but you can add them in again if you wish to use this.

This file is saved as osckey.py and should be set to be executable using

Depending upon whether you want to control Sonic Pi on the Raspberry Pi, or on a different external computer you start this file running in a terminal window using

to run it on the local Raspberry Pi computer and with

where a.b.c.d is the IP address of the computer running Sonic Pi (on a connected local network). If you now start Sonic Pi running (on the appropriate computer), then, if you touch some of the keys on the touch keyboard, you should see OSC messages showing up in the cues log on Sonic Pi. 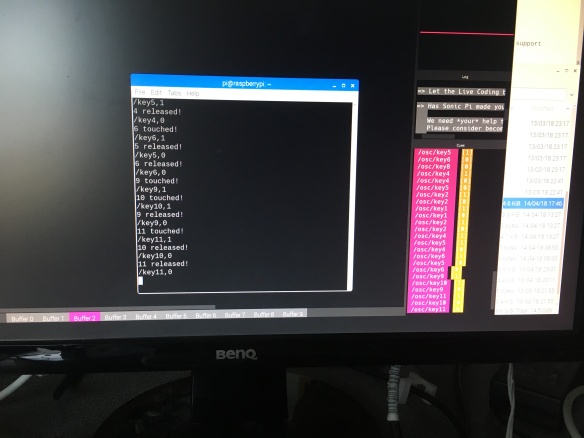 Now we can write some Sonic Pi test code to use these OSC messages.

Below is a simple test program which detects the incoming OSC messages from the keyboard and uses them to play the notes in a scale, and to allow the scale to be shifted up and down over several octaves. It also uses two keys to choose the synths to be used. Note, that when Sonic Pi receives an incoming osc message of the form /key1 it modies it to /osc/key1  This is so that it can be distiguished from cues coming in from other sources, eg midi or generated by Sonic Pi cue commands.

The live_loop :getkey is at the heart of the program. First it sets use_real_time to minimise any delay in the program responding and to give the quickest response to a key being pressed. Then it uses a sync command to wait for an incoming osc message with address “/osc/key*” This will match ANY of the keys /key1 to /key11 being pressed. It checks whether the message received is a 1, and if so (the key is pressed) it uses a function to parse the synced address and to retrieve the value of the wild card * which matched the key being pressed. The rest of the loop then uses the key number to either play a note (keys 0 to 7) or to shift the octave range (kesy 8 and 9) or to change the synth being used (keys 10 and 11). The initial base note is set to 60 but is increased or decreased in steps of 12 when keys 8 and 9 re pushed, with minimum and maximum values set to 36 and 84.

previously I had written a program called Sonic Pi Loop Controller which used TouchOSC to control Sonic Pi as shown in this video I decided to convert this to work with the touch keyboard instead. To this end, I added an extra feature to the osckey.py file enabling ot also to hadle input from a wireless PS3 games controller which I hd previously used with Sonic Pi here  I cu thsi down to only look at the input from the righthand joystick on the controller. This was used to adjust the cutoff value when playing notes with the :tb303 synth (left-right movement) and to adjust the volume of the percussion loops and the tb303 synth (up down motion). The changes to the osckey.py file involved uncommenting two sections of code, the resulting file being osckeyps3.py, which I haven’t documented here, but which can  be retrieved via the download link at the end of the article, as can the associated file to run on Sonic Pi which is shown below.

Note this program works even if you drive it with the osckey.py of the keyboard software, and it sets default values for the cutoff and volume values which will apply in the absence of the ps3 controller.

Both programs work OK on a Pi3. However, there is some latency, which is much reduced if you just use the Pi to send the osc messages to Sonic Pi running on a separate Mac.

I hope that these examples will inspire you to build a similar keyboard. It is not expensive to do, and, as the Sonic Pi programs show, it makes it possible to control Sonic Pi with a wide range of possibilities.

A video showing the keyboard running on a Pizero W driving Sonic Pi on a Mac is available here.

The software can be downloaded for my gist site here.